The 2021 Toyota Fortuner has recently launched in the Philippines bringing with it two new distinct faces that cater to multiple demographics in its segment. Along with its new looks, the popular SUV also comes with more power under the hood. Toyota has even given the refreshed Fortuner more features as well as better safety features to make it even more competitive than ever. With its new upgrades, let’s see how it stacks up against the rest of its competitors in the midsize SUV segment in the Philippines. The 2021 Toyota Fortuner comes with two distinct faces that are ready to cater to buyers in its segment. It has a more subdued updated look for those who love the style of the pre-facelifted model but want a little bit more of an upgrade. It also has a sportier look thanks to the new top-of-the-line LTD variant. With these new faces, fans of the old look and fans of the new LTD variant can get the best of both worlds. The interior of the refreshed Fortuner, however, remains the same with a few extra touches to give it a more premium feel. The latest additions of new cabin accents and mood lighting have updated the interior. The seating layout hasn’t changed, however, and the 3rd show still folds to the side hindering cargo capacity at the back.

If its sales figures of over 220,000 units sold in the Philippines since its first entry into the market is anything to go by then buyers will surely enjoy the latest model of the Fortuner. 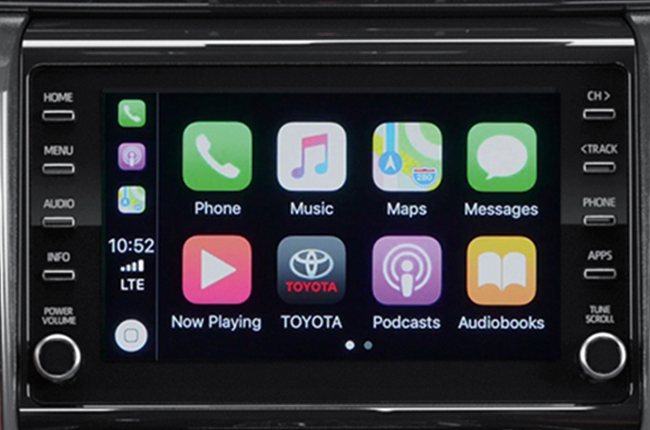 Recent releases from Toyota’s competitors have raised the bar when it comes to features found in the Fortuner’s category. With the recent update, the Fortuner now has become even more competitive than ever. For the range-topping model, it now comes with Toyota’s Safety Sense giving it better safety and crashes avoidance features. It's at the point where the vehicle could almost drive itself on the highway, but of course, driver input is still needed. The safety suite of features has given the midsize SUV lane keep assist as well as adaptive cruise control raising the bar for its competitors. It even now comes with a 360-degree camera for the Q variants and up making the vehicle easier to park and maneuver.

The new addition of Android Auto and Apple CarPlay capable head units have also added to the appeal of the Fortuner putting it on par with its competitors. The updated 2021 Toyota Fortuner now comes with more power under the hood. For its facelift, it now comes with 201hp and 500 Nm of torque putting it on par with its competitors that have a similar output. As for its 2.4-liter variants, they too get a slight increase in power as they now produce 147hp and 400 Nm of torque. Its transmission options still remain the same coming in with a 6-speed manual and a 6-speed automatic transmission. This puts the Fortuner in a fairly ideal spot for those looking to get a powerful SUV. Toyota has even stated that even with the increase in power fuel economy has increased by 4-5% depending on the engine. Being the more balanced option when it comes to SUV choices in the Philippines, the refreshed Toyota Fortuner offers a lot for its price tag. You get more power in its latest iteration, the addition of Toyota’s Safety Sense, and more features that give it a great value for money proposition. Overall all the refreshed Fortuner is definitely a vehicle worth putting on your vehicle shortlist. If you want to get your hands on Toyota’s popular SUV today, then we highly recommend using our Buy Online function to make getting your Fortuner to go as smoothly and as easily as possible.

Just One More Step To Get Your Quote

Find out more info, request a brochure, or request a quote by sending an inquiry below

How does it work?

Benefits of Making a Reservation Online

AutoDeal is the most trusted auto platform in the Philippines, with over 350 official dealers and 12 brand partners.

We have a dedicated support team, so if you have a question send us an email at reservations@autodeal.com.ph

The AutoDeal online reservation service saves you the hassle of having to visit a dealership to start your purchase journey.

Get Notified about Toyota Deals